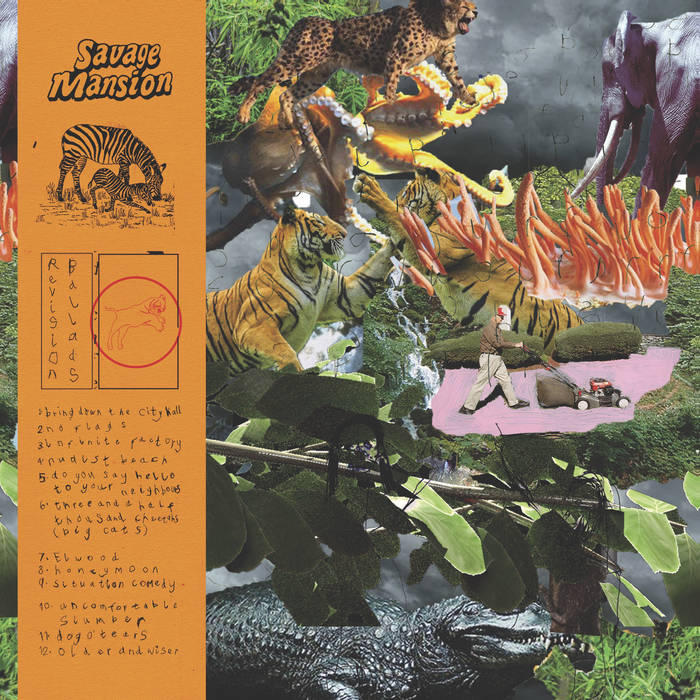 Lost Map Records are proud to present the irresistible debut album Revision Ballads by Savage Mansion, AKA Glasgow-based purveyor of scuzzy slacker guitar pop Craig Angus. Due for release on February 15, 2019 on 12” vinyl, digital download and via all major streaming services, the album is preceded by the single ‘Elwood’, the video for which is available to watch and share now (as are the videos for ‘Do You Say Hello To Your Neighbours’ and ‘Older and Wiser’).

Since starting out making music originally as Poor Things, Craig has become heavily involved in Glasgow’s DIY scene, assisting various bands, putting on gigs and hosting all-dayers across the city. It’s out of that creative fervour and energy that Savage Mansion has emerged – as a vehicle for Craig’s effervescent speak-sing slice- of-life songs, abetted on record and at shows by a revolving cast of musicians typically including Lewis Orr on drums and Andrew McPherson and Jamie Dubber from Catholic Action on second guitar and bass (former drummer Taylor Stewart features on the record and remains the band’s spiritual guru). Revision Ballads also features backing vocals from Scottish Album of the Year nominee Martha Ffion, whose single ‘No Applause’ / ‘Lead Balloon’ was released via Lost Map in 2015, and with whom Craig performs as guitarist in her live band.

Craig made his debut for Lost Map as Savage Mansion with a double A-side PostMap single in 2017 – ‘Do You Say Hello To Your Neighbours? / ‘Honeymoon’. It was followed in May 2018 by the Document EP, which was released as a limited-edition Lost Cat cassette. Gathering together some previously released tracks together with a clutch of brand new material, Revision Ballads wears its influences from the Velvet Underground, Neil Young, REM, Pavement and Parquet Courts proudly on its sleeve, and represents the first complete statement yet as to what makes Savage Mansion such a loud, loose and endlessly entertaining proposition. From the ferociously melodic likes of ‘Bring Down The City Hall’ and ‘Nudist Beach’ to deceptively easy-going earworm about confronting a childhood tormentor ‘Elwood’, ‘Dog O’ Tears’ rambling response to living in an increasingly xenophobic society, and the final climactic bone-rattling shake of ‘Older and Wiser’, Savage Mansion are the heart and the soul and the kick-in-the-arse call to action every self-respecting DIY scene needs.